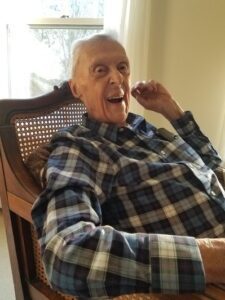 John Frederic Spence Jr., 95, of Duxbury, died peacefully at his home at The Village at Duxbury on Dec. 13. He was born in Brockton, on July 8, 1926, the son of John and Grace (Joyce) Spence. He went to public school in Rockland and then graduated from Phillips Exeter Academy in 1943. Because of war time conditions, he went directly to summer school at Harvard. During his college years he joined the Navy V12 program and was commissioned as a supply officer in 1945. A little-known fact he told his children was that he had breakfast on Thanksgiving Day on a destroyer between Tsing Tao and Inchon. He spent a year in the Navy and returned to Harvard to finish with his class in 1947.

Returning to Rockland, he went to work with his father at the Rockland Welting Co. and served a term on the Rockland School Committee. As the welting business declined due to changes in shoe manufacturing, he started working at the Rockland Trust Co. in 1965.  Beginning as a loan officer (a job he was most proud of) he rose through the ranks to become the Chairman of the Board and CEO. He retired at the mandatory age of 72 in 1998.

He married Betty Cameron Spence (Cam) on Dec. 30, 1950 and they were lucky enough to celebrate 60 wedding anniversaries. Living in Duxbury, they raised five children and were members of Holy Family Parish. A member of the frostbiters in the Duxbury Bay sailing community in the 1960s he only experienced a dip in the icy waters once. Was it a tall tale he told us that he put some of his kids in the boat for ballast? With his wife and friends, he enjoyed cruising both in New England waters and farther South. He felt traveling was an adventure that he loved to share with his wife and with his children. All of his children remember going on the tour of a city the first day so then they could then explore on their own. He also scoped out all the banks to get the best exchange rate. In his later years he especially liked taking the family to more out of the way places such as the Canadian Rockies, Newfoundland and Sardinia.

He was proud of his community service which included: three terms on the Duxbury School Committee during the 1970s; membership on the Community Action Council; serving as assistant treasurer of South Shore Hospital and treasurer of the Jordan Hospital.  He also supported his wife’s special charities in a big way and did alumni interviews for Harvard College for students on the South Shore for many years.

After his wife died in 2011, he sold the family house on Linden Lane. Happily moving into a lovely sun-soaked apartment at the Village at Duxbury, he was an active participant in the Village community. He continued to appreciate the town of Duxbury, still loving to take rides with his children around the town, commenting on its beauty. Using one of his favorite superlatives, his family wants him to be remembered as a “good scout” and in all ways a generous man.

In lieu of flowers contributions may be made to the Duxbury Interfaith Council (PO Box 1161, Duxbury, MA, 02331) or the charity of your choice.