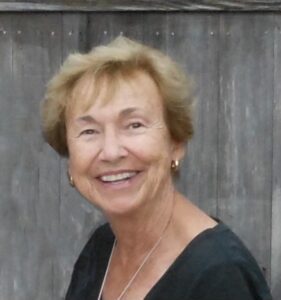 Irene Millicent Farrell Conlon of Pembroke, 85, passed away on Friday, Sept. 23 at Massachusetts General Hospital from injuries sustained in a fall. Her family was by her side.

She was predeceased by her husband of 45 years, Patrick J. Conlon in 2004. Irene is survived by her beloved family, including her children and their spouses, Dan iel Conlon (Tegan) of Redding, Connecticut, Richard Conlon (Teresa) of Weston, Connecticut and Ann Robinson (James) of Duxbury, and her grandchildren Katherine Conlon (Boyang Hou), Kiera Donnelly (Philip), Patrick Rob inson, Caroline Robinson, Allison Irene Rob inson and Jordan Farrell Conlon. As she was bravely fighting her injuries in the hospital, she was blessed by the arrival of her first great grandchild, Nieve Irene Donnelly on Sept. 18. She is also survived by her sister, Virginia Car ey of Chesapeake Beach, Maryland.

A long-time resident of Westport, Connecticut where she lived from 1965 until retiring to coastal South Carolina in 2000, she went back to college in her 30s while raising her family, and earned a bachelor’s degree in psychology and a master’s degree in special education from Fairfield University, and a master’s degree and a sixth-year certificate in advanced education studies from Pace University. Irene enjoyed a career as an advocate, curriculum designer and educator for special needs children. She ultimately led the committee for special needs children across the Eastchester, New York public school district.

Upon the passing of her husband, she moved from her home in Pawleys Island, South Carolina to East Sandwich where she re-entered the classroom after a five-year retirement, serving as a part-time teacher at the age of 65. Her family enjoyed spending many idyllic summers with her on Cape Cod, sharing the beautiful sunsets at Sandy Neck. She was an avid reader and gardener with a deep curiosity and an abiding love of learning. She took great pleasure in spending time with her Labrador retriever, Tucker, who was her constant and devoted companion. Her beautiful energy and charisma were a delight to her family and all she met. She was loved deeply by all who had the good fortune to know her.

Visitation will be held on Friday, Sept. 30, from 3 to 7 p.m. at Bouton Funeral Home, 31 West Church St. in Georgetown, Connecticut, followed by funeral services on Saturday Oct. 1 at 11 a.m. at St. Patrick’s Church in Redding Ridge, Connecticut. She will be buried next to her husband in the Redding Ridge Cemetery. To offer the family online condolences visit www.boutonfuneralhome.com