Oftentimes before a particularly pivotal regular-season showdown, teams will refute the notion that one game is more important than the rest.

The mindset with this approach is to not sleep on less talented teams and to minimize disappointment if the bigger game doesn’t go their way.

But for the Duxbury girls hockey team, heading into its rematch with Braintree on Wednesday, there was no holding back: The players and coaches weren’t afraid to call this a revenge game.

After the Wamps knocked them out of the tournament a season ago, the Dragons were eager to get them back in a top 10 clash at Zapustas Ice Arena. They pounced early, fended off a second-period surge and prevailed in the third, thanks in part to an electrifying game-winning goal from Emily Ballerene with 39 seconds left in the game.

The result was an extremely satisfying 4-3 triumph. Yes, they acknowledged, this one meant more than all the others before the playoffs.

“This is probably our most rewarding win, because of what happened last year,” the senior Ballerene said. “Losing to them, the way we did, it was really rewarding to come back this year. It was a really tough game that we had to play all 45 minutes for, so it proved to us that we can push through.”

Ballerene’s heroics were ultimately the difference, but she insists she was simply in the right place at the right time. Duxbury went on the power play with 2:41 remaining after a Braintree player tripped Meghan Gambino, which set the stage for what followed.

Coach Paul Reissfelder called timeout to set up a play the Dragons had been practicing for a while. It nearly worked, as Delaney Williams almost scored, and Duxbury kept peppering the goalie with shots.

Eventually, just as the power play ended, Mairead Kennedy found Ballerene, who tipped the puck home. The Dragons celebrated briefly, fended the Wamps off for 39 more seconds and then celebrated fully.

“We just channeled how we felt last year and used that to come back in the third period,” Ballerene said. “The third period was one of our best periods of the season so far.”

You can find a longer version of this story, with more text, quotes and photos, in this coming Wednesday’s Clipper. 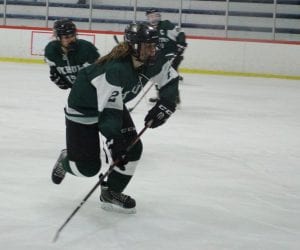 Emily Ballerene and the Dragons found a way Wednesday.